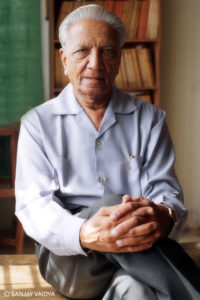 (from Brochure, 2008): Somewhere around 1940, the nationalist and social consciousness of the Gandhian era in Gujarati poetry gave way to a consciousness of the aesthetic. The poet Prahlad Parekh (1911-1962) initiated a process which got further perfected in the hands of Harishchandra Bhatt (1906-1950), Rajendra Shah (1913) and Niranjan Bhagat (1926).These poets created a whole new world of poetry in which the progressive bent disappeared and there was an all-pervading air of enchanting, natural beauty. The emotion of love appeared in bright, solid colours accompanied by beautiful rhymes and metres. Both lyricism and poetic language find a full-throated expression as keen images and sensuous symbols interweave with melody. This is how Niranjan Bhagat's poetry took shape when it first appeared in Gujarati.

'Chhandolaya' (1943) and 'Kinnari' (1959) brought to us poems Niranjan Bhagat had written since 1943. The red hand-made cover of 'Chhandolaya' and the yellow of 'Kinnari’ added a dash of colour to Gujarati poetry. These collections created a new note; a beginning of what is called in historical terms, ‘Rajendra-Niranjan Yug.' The Age of Rajendra-Niranjan was the one following that of Sundaram and Umashankar. With 'Alpaviram' (1954) and the second edition of 'Chhandolaya' (which included the 'Pravaldveep’ group of poems), Gujarati literature was exposed to a metropolitan consciousness and modernist trends for the first time. With this, Niranjan Bhagat established himself as a major poet of the language. The experience of a modern city in Niranjan Bhagat's poetry emerges through a modernist sensibility. After the publication of 'Tetrees Kavyo' (1958), the poet withdrew from the world of poetry. However, his ties with poetry were not severed.

They continue in the form of research, criticism, lectures and the activity of translation. more..